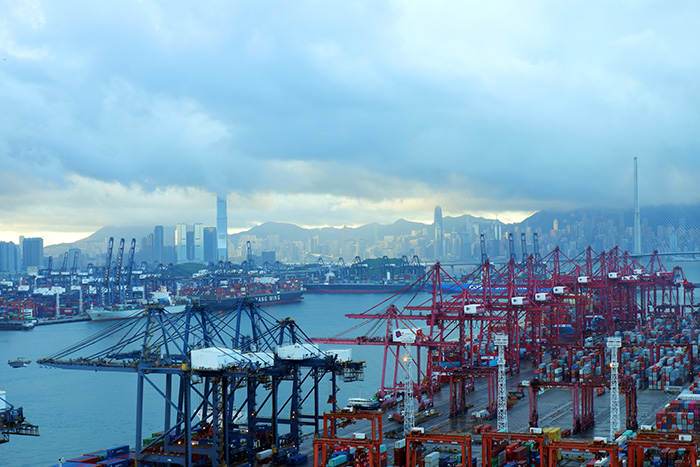 February 19, 2021 By Victoria Rahmanovic No comments yet

The trans-Pacific container shipping system is sagging under a seemingly unending deluge of imports from Asia into North America. The winter storms have only stressed some port gateway further and slowed cargo through rail hubs including Chicago.

Importers are often shelling out more than double the posted rates to secure ship and container equipment capacity and watching demurrage fees stack up, while carriers prioritize imports over lower-paying exports, frustrating US and Canadian farmers and other exporters.

Marine terminals at the Los Angeles and Long Beach port complex don’t expect the congestion that has been building since summer to clear until late spring, while other major ports grapple with the surge that has slowed but not stopped operations. And with importers attempting to bring additional cargo in before some Chinese factories shut down for Lunar New Year celebrations that began Feb. 12, container lines and marine terminals spent February battling vessel delays and congestion at key Chinese export gateways. US imports from Asia in January increased 14 percent from January 2020, according to IHS Markit data.

“The opportunity to find alternative gateways [to Los Angeles and Long Beach] where there is a material difference in throughput productivity is becoming smaller and smaller because of the increased diversions and the ongoing surge in general,” Charles van der Steene, head of sales for Maersk, North America, said in an interview. However, he expects dwell times at other major North American ports such as Savannah and New York “will plateau and not catapult out of control.”

Ships are leaving Asian ports later than scheduled due to container equipment shortages and then sometimes experiencing weather-related delays before reaching US ports. As a result, ocean carrier on-time performance from Asia to the West Coast of North America was a dismal 22.1 percent in December, down from 70.9 percent in December 2019, while ocean reliability to the East Coast fell to 26.3 percent from 70.5 percent during the same period, according to the latest data from Sea-Intelligence Maritime Analysis.

This unprecedented decrease in service levels — caused by the bullwhip effect of import demand falling in the first half before rocketing since the second half and a subsequent shortage of container equipment for Asian exports — has spurred shippers to accuse carriers of price gouging and carriers to argue the system can’t handle the volume. Unsurprisingly, the US Federal Maritime Commission has upped its monitoring, and Commissioner Rebecca Dye has hinted at potential major changes coming this month in how the agency addresses detention and demurrage charges. Hearing complaints from their agriculture exporter constituents, members of Congress are asking the industry to help get them needed equipment for soybeans, grains, and other commodities.

All of this comes as importers and container lines hash out annual trans-Pacific service contracts, which the industry widely expects will include higher base rates than last year’s agreements, although the extent of the pricing increase is still unclear. If spot rates in the eastbound trans-Pacific are an indication as to where annual service contract rates will end up this spring, contract rates will be much higher than last year.

As of mid-February the spot rate from China to the West Coast was $3,969 per FEU, an increase of 178.9 percent from the same week last year, and the East Coast rate was $4,800 per FEU, up 73.4 percent year over year, according to the Shanghai Containerized Freight Index. However, the actual rates importers are paying are much higher than the spot rates when surcharges for equipment and space guarantees on vessels are included. Non-vessel-operating common carriers (NVOs) say West Coast rates above $6,000 per FEU and East Coast rates above $7,000 per FEU are common for premium services.

Service contract negotiations are expected to shift into high gear in March, with carriers, NVOs, and shippers saying per FEU rates will increase noticeably from this year’s levels of about $1,350 to the West Coast and $2,350 to the East Coast. Except for the largest retailers, carriers are reportedly pushing for rates of about $2,600 to $2,800 per FEU to the West Coast and $3,600 to $3,800 per FEU to the East Coast.

The service importers are receiving and how their various routings through US and Canadian ports are performing is framing negotiations for the contracts that generally run from May 1 through April 30. While a larger number of shippers are signing contracts earlier so they can expand their minimum quantity commitments and get extra space now, there’s another camp waiting to see if there’s any relief in spot rates during the two-week Chinese New Year celebrations.

Container flows are adjusting to bottlenecks in Southern California, most noticeably with carriers boosting capacity to Oakland and the Northwest Seaport Alliance (NWSA) of Seattle and Tacoma. Zim Integrated Shipping Services, for example, will commence a service Feb. 21 that will call in Southeast Asia, Los Angeles, Tacoma, and Vladivostok, Russia, before returning to Laem Chabang, Thailand.

In the past two months, carriers have announced several new trans-Pacific services to North America’s Pacific Coast that do not call at Los Angeles nor Long Beach.

Wan Hai Lines in mid-March will double its current two trans-Pacific strings to four, including a new Pacific Northwest service from North Asia to Seattle and Oakland that will omit Southern California entirely. CMA CGM launched its Golden Gate Bridge service (a restructuring of the carrier’s former SeaPriority Express service) with a rotation of Yantian, Oakland, Seattle, Shanghai, and Yantian. And Mediterranean Shipping Co. in December started its Chinook service with a rotation of Yantian, Shanghai, Busan, Vancouver, and Yantian.

The executive directors of Oakland and the NWSA told JOC.com in early February that carriers are in advanced stages of planning additional services to their ports.

That’s not surprising considering there’s still a massive ship queue in Southern California, with the number of ships in the queue outpacing the number of ships at berth for all but six days between January and Feb. 15, although the margin has been narrowing in recent days, according to the Marine Exchange of Southern California. For example, on Feb. 15, there were 32 container ships at anchor awaiting berthing space and 28 container ships at berth being worked. Terminal operators say near-record container volumes will continue well into the spring, but the backlogs of vessels in the harbor and laden inbound containers on the terminals should dissipate sometime between April and June.

“Terminals are full. There’s nowhere to put the containers. We’re 35 percent below what we normally do on deliveries [to truckers],” Ed DeNike, president of SSA Containers, told JOC.com.

‘Stressed but not broken’

Although the Asia import surge has overwhelmed the LA–Long Beach port complex, imports are flowing relatively smoothly through the other busiest container gateways. A mild winter and a catch-up in cargo handling in recent months keeps cargo flowing through British Columbia ports, a boon not just for Canadian shippers but for those US shippers importing cargo through Prince Rupert and Vancouver. In a Feb. 15 advisory, however, Hapag-Lloyd warned customers of slowing cargo flow through both ports as forecasts for colder weather would require the Canadian National Railway and Canadian Pacific Railway to run shorter trains, limiting the amount of cargo that can be removed from terminals.

There is also a risk of disruption in Eastern Canada, as the truce between Montreal waterfront employers and longshore workers expires March 20, and shippers have already begun diverting cargo. In case the Maritime Employers Association (MEA) and Canadian Union of Public Employees (CUPE) don’t agree to a new contract or extend the truce by March 21, shippers moving goods not destined for or originating from Montreal can route through the ports of Halifax, Saint John, and New York and New Jersey.

Cargo flow through the Port of New York and New Jersey is improving after average container dwell times at marine terminals in late fall and early winter rose to 10 to 11 days, a rate approximately double that seen during normal times, said Sam Ruda, port director at the Port Authority of New York and New Jersey (PANYNJ). In a Feb. 3 interview, Ruda said he was optimistic that marine terminals would be able to catch up after a snowstorm closed most marine terminals for just a day. The winter storm this week, however, has  forced the closure of some NY-NJ terminals.

The Asia import surge has also tested Savannah, the second-largest East Coast port. The Georgia Ports Authority (GPA) says cargo flow is improving after some issues in January, when import volumes were more than 20 percent higher than a year ago as retailers restocked inventories and shifted goods away from congested Southern California supply chains.

While the record surge in volumes bumped up average container dwell times in Savannah to nearly six days, 24 to 48 hours longer than typical for January or February, the GPA said it is working around the clock to move the cargo as quickly as possible and communicating with cargo owners to help resolve any supply chain problems. Eight to 11 vessels were anchored outside Savannah’s harbor in mid-January, but that total had fallen to four in mid-February, the GPA said.

“We’re running at a rate that is about 1 million more TEU than we had last fiscal year,” said GPA CEO Griff Lynch. “We’re doing everything we can to keep pace with that, but clearly no one’s built to absorb that kind of growth year over year without some kind of challenges.”

Check out the full article at JOC.com by clicking here –> Full Article