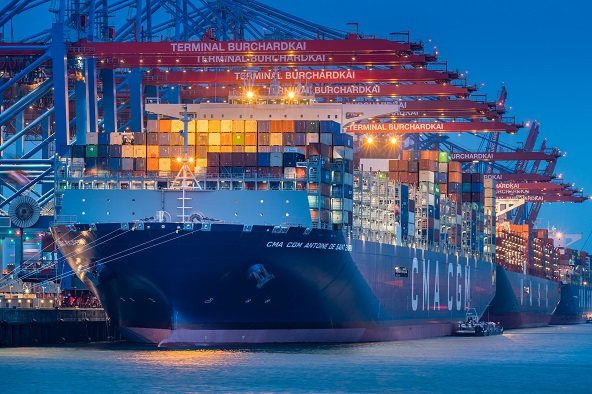 March 12, 2021 By Victoria Rahmanovic No comments yet

Shippers, carriers, and forwarders are reporting growing trans-Atlantic demand, but the strengthening westbound market is being tempered by equipment shortages and deteriorating service levels ahead of record rate increases.

The trans-Atlantic has avoided the volatility in volume and rates experienced by the other east-west trades, but its stability is being rocked by fast-rising demand and the spillover effects of disruption on the Asia-Europe trade lane.

“What is new in 2021 is a clearly bigger increase in demand versus last year,” said Helge Neumann-Lazius, vice president and head of FCL for Europe, Middle East, and Asia at DHL Global Forwarding. “We are seeing in our bookings a 10 to 15 percent increase in actual demand, which is hefty for the trans-Atlantic.”

But difficulties in sourcing equipment are challenging forwarders. Neumann-Lazius told JOC.com the trans-Atlantic was dominated by westbound cargo flows, and the rising volume was leaving containers in the wrong place. “The major disruption we see is from equipment. It is not that there is not enough equipment, but rather that it is not positioned correctly,” he said.

Deteriorating carrier service levels on the trans-Atlantic was another factor that had to be managed by forwarders and shippers on the trade, a problem that was worsened by the poor on-time performance of vessels on the Asia-Europe services.

“In ports such as Rotterdam, weather has caused some disruption, but it is mainly caused by the majority of the Asia services that are not on schedule,” Neumann-Lazius said. “Right now it is first come, first served instead of hitting windows, and that creates a lot of issues for the quicker trans-Atlantic services.”

Despite the challenges, Neumann-Lazius said DHL’s long-term outlook for the trans-Atlantic trade was “very stable and positive,” a view that was shared by Alison Leavitt, managing director of the Boston-based Wine and Spirits Shippers’ Association (WSSA), whose members ship 350,000 TEU per year on the Europe–North America trade.

Leavitt said WSSA was “extremely bullish” on demand this year. “We expect demand to continue to be very high especially as the restaurant, bar, cruise ship, and airline business returns because there is so much pent up demand in those sectors,” she told the JOC’s virtual TPM21 conference.

But Leavitt’s sunny outlook was darkened by poor service reliability from the carriers and problems over the past six months with having contracted weekly allocations honored, despite stable volume and accurate weekly forecasts.

“For many [beneficial cargo owners], the contracts have been virtually worthless,” Leavitt said. “It’s not across-the-board abuse from the carriers, but we have had guaranteed allocations that are just not being honored. It is really disappointing when we get a call from a carrier saying they are not taking our bookings for two weeks, or are not honoring the allocation this week. Some of it is legitimate because of a blank sailing, or backlogs being so intense, but when it is about getting more money from the spot market, that’s not fair.”

“What is astounding is how fast the market has recovered after the collapse of the second quarter last year,” he said, adding that strong demand would continue, especially westbound from the Mediterranean and North Europe to North America.

“That is weighing severely on the system. Equipment is tight because the demand is simply too high. We cannot procure boxes fast enough. Prices are going up because no one was prepared for this. There is no immediate end in sight, so this situation will be with us for most of the first half,” he said.

The short-term rate on the trans-Atlantic this week is $2,248 per FEU, according to data from rate benchmarking platform Xeneta. Spot market rates have risen 25 percent in the past 12 months, far off the soaring prices being seen on the other east-west trades. China-North America rates are up 165 percent year over year, and the China-North Europe rate is 402 percent higher year over year.

However, substantial rate increases have been announced on the trans-Atlantic by Hapag-Lloyd, CMA CGM, and Mediterranean Shipping Co. for March and April. From April 1, Hapag-Lloyd will increase its freight all kinds (FAK) rates by 333 percent to $7,320 per FEU, while CMA CGM plans to set its rate levels 282 percent higher at $6,200 per FEU. MSC has set its FAK rate from Antwerp to Montreal at $4,200 per FEU from March 1.

The size of the rate increases have caught the market by surprise. “There are new rate increases for April, and they are at levels I have never seen before,” said Neumann-Lazius. “We have had some increases through last year, but they have been in the range of $100-$150 per quarter, but nothing like this.”

Judah Levine, research lead at logistics software provider Freightos, told JOC.com that despite the blank sailings, there was more offered capacity in March compared with February, yet freight rates have continued to climb.

“Climbing rates paired with more capacity suggests that the rate increases are demand-driven, but of course helped along by a reduction in supply,” Levine said. “The major increase in Europe to North America spot rates happened only in the last six weeks, as rates climbed 20 percent. As the vaccination campaign in the US is making progress, we anticipate that trans-Atlantic demand will continue to be strong.”

While rate levels have increased, schedule reliability has been heading in the opposite direction. Trans-Atlantic westbound on-time performance in January was down 31.7 percent year over year to just 31.8 percent, according to Sea-Intelligence Maritime Analysis.

Data from eeSea, a platform that maps carrier schedules, shows seven sailings are set to be blanked in March on the trans-Atlantic compared with two during the same month last year, but Simon Sundboell, founder and CEO of eeSea, said carriers were also inserting de facto blanks in the form of schedule recovery measures.

Hapag-Lloyd announced this week the AL1 service leaving Rotterdam on April 7 has been canceled “due to a lack of suitable vessels,” and the 2M Alliance of Maersk and Mediterranean Shipping Co. will remove Liverpool and the westbound call at Newark from their joint TA2/NEUATL2 trans-Atlantic service, one of three North Europe-US services offered by the alliance, Alphaliner noted in its latest weekly newsletter. The 2M partners plan to return to the regular schedule in mid-May.

Unlike blank sailings made by carriers in response to weak cargo volumes, these missed voyages are structural in nature. When a vessel has been delayed for a week or longer at a given port, the carrier will then institute a “structural” blank for that ship’s next sailing to rectify the service schedule.

In addition to the schedule recovery measures, Sea-Intelligence said in a recent Sunday Spotlight newsletter that trans-Atlantic vessels withdrawn through blanking or slidings could be shifted to more profitable trades, such as the trans-Pacific. That would have the effect of reducing capacity and further increasing rates, Sea-Intelligence noted.