March 15, 2021 By Victoria Rahmanovic No comments yet

Air cargo shippers should prepare for at least another three years of elevated freight rates, according to Glyn Hughes, the newly appointed director general of The International Air Cargo Association (TIACA).

Airlines will struggle to match capacity with highly uncertain passenger demand, Hughes and others told the JOC’s virtual TPM21 conference, while also facing the prospect that some lucrative business travel may have been lost forever.

“The airlines have to resize their fleets based on expected passenger numbers, and you can’t operate the 2020 fleet at 2015 passenger volumes,” Hughes said. “They have to keep their optimal level of load factors to make the operations economically viable.”

Half the available global air cargo capacity is provided by the below-deck space on widebody passenger aircraft flying long-haul routes, but the majority of this “belly” capacity has been grounded since March 2020. COVID-19 travel restrictions and quarantine measures have been extended into 2021, with Cathay Pacific, for instance, carrying 99 percent fewer passengers in January compared with the same month last year. 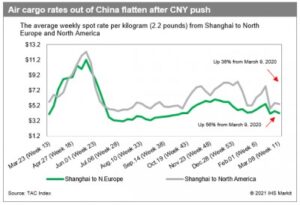 The severe space shortage that came with widespread travel bans saw air cargo rates on the trans-Pacific and Asia-Europe routes spike to record levels in April and May as urgent demand for personal protective equipment (PPE) and medical supplies overwhelmed all available capacity out of China. While pricing has fallen off those extreme highs, rates remain more than double what they were at this time last year.

As strong demand for air cargo continues to outstrip available capacity, and with shippers desperate to avoid the expensive spot market, forwarders are under pressure to find and contract space on tightly constrained routes out of Asia. Many forwarders have extended their existing trans-Pacific and European charter contracts for the rest of the year.

But the most common forwarder practice of securing capacity remains block space agreements (BSAs) with airlines. Airlines make annual capacity available for BSAs depending on the state of the market. If there is high demand and high prices, the carriers will tend to limit contracted space and keep more cargo on the spot market, and that can be seen in the current market.

Forwarders lock in capacity through BSAs

With demand expected to outstrip available capacity for the foreseeable future, Jan Kleine-Lasthues, chief operating officer for air freight at Hellmann Worldwide Logistics, said this was being factored into Hellmann’s service offerings to shippers.

“What I am recommending to some of our customers is if you want to secure capacity at the moment, the best way is to sign some BSAs for 50 to 60 percent of your needed capacity, never 100 percent,” he said, explaining that this would allow for some flexibility. “If you don’t do that, you are completely dependent on the spot market.”

Rates began to rise significantly from March 2020, and even though the year over year comparisons will soon become negative, the rates are still elevated compared with 2019 levels.

“The prices will be high for at least the next nine months,” Manel Galindo, CEO of rate management solutions provider WebCargo, told TPM21. “We have seen many countries being locked down again, and that means less flights and a much more complicated 2021.”

These complications are keeping forwarders on edge. Kleine-Lasthues warned the TPM21 audience that the market would remain extremely unpredictable in the near term.

“I think rates will stabilize around the current high level, but if one or two airlines pull out of a particular lane, like they did on Europe to South Africa in January when the new COVID-19 variant was discovered, I think you will see rates going sky high on those routes,” he said. “If everything goes smoothly, and the vaccinations are rolled out, rates will stabilize around the middle of the year.”